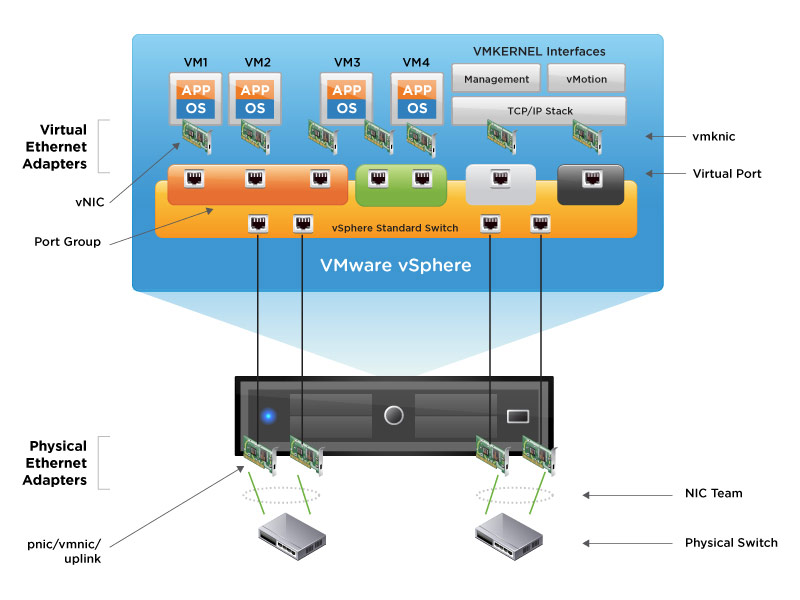 Networking can be a pain in the ass if you’ve don’t have a deep knowledge.
This is the same regarding virtual networking.

So this post series will focus on virtual switches, how they work, configuration and operation/troubleshoot.

Frames – Data + header  of Layer 2, aka ethernet frame for instance.

What Is Virtual Switch?

A virtual switch is a software layer inside the hypervisor (ESXi) which can forward and filter L2 frames to virtual machines.
Not like a physical switch, the virtual switch learns about the MAC addresses by two ways:

What can we configure on virtual switch?

In vSphere there are several kinds of virtual switches:

So you ask why to use standard switch?

Not to be confused – vCNS / NSX creates logical switch which is not exactly the same. they are parallel to the virtual switch and as a matter of fact uses virtual switch as their uplinks. (NSX explained in another post).

Background to vnic and MAC addresses

for each vnic of virtual machine, there is a default MAC address which is defined in the vmx file.
guest OS can change this default MAC when they boot (or whenever you run a command to change it). this includes Linux and

In Linux you can run the command ifconfig to change interface MAC:

In windows you can change MAC from device manager in the properties of your ethernet card (in the advanced tab).

without that, you will be able to receive packets for vmk0 only! (might be another vmkernel port but this is the default behaviour).
vmk0 gets by default the MAC address of the first vmnic (vmnic0 or eth0 if you’re a linux guy and wants to understand).

by the way, if you clone nested ESXi, the vmknic0 will keep the previous MAC so you will have duplicate MAC.

As I told before, it’s possible to change the adapter’s MAC address from the guest OS. this parameter determine if the virtual switch will accept MAC changes for each vnic.

refers only to inbound packets from outside to the virtual machine (receive, not transmit). in the vmx file there is a MAC address for each vnic. if the packets go outside the VM have different source MAC, then the packet will be dropped!

use this whenever there are manual/software changes in MAC addresses. (Load Balancer, nested ESXi).
avoid accepting it will drop all inbound packets!

use this whenever the VM is sending ethernet frames with different source MAC address.
avoid accepting it will drop all outbound frames which has a different MAC than the main MAC registered with the vnic.

all packets which received by the port group will be forwarded to all its ports.
use this whenever the VM has to listen to more than one MAC.
avoid accepting it will drop all inbound packets which has a different MAC than the main MAC registered with the vnic.

Port Groups and VLANs – how it works?

Each port group can be configured for VLAN tagging, without VLAN tagging or trunk.
What are the differences exactly and how each one of them acts?

Each one of the inbound/outbound packets will be forwarded as is, as long as there is no VLAN tagging inside the header. there is no changes at the ethernet frame.
use this setting if you have a flat network (without VLANs), if your physical NIC connected to the virtual switch configured for tagging or configured for native VLAN.

use this setting when the physical NICs configured for tagging and you want to configure mulitple VLANs for your VMs.

Each one of the inbound/outbound packets will be forwarded as is. there is no changes at the ethernet frame.
use this setting when you have VMs which needs to manipulate several VLANs. (Software router for instance).

In the first post we’ve learned what is the virtual switch exactly, how it works, what are the features.
So now I hope it will be easier for you to plan how to build it and what are the options you might enable.

In the next post I’ll review how to troubleshoot and run commands refers to the virtual switch.